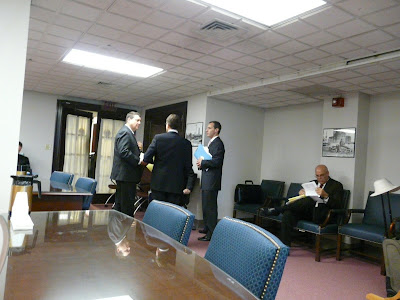 Jury Awards $5.75 Million in Medical Malpractice Suit
December, 2003
Miami-Dade Circuit CourtCase No.: 00-14725-CA-30
Salvador Plasencia v. Jorge Echenique, M.D. and Miami Urological Surgical Consultants
Plaintiff attorneys:
Partner Marvin Kurzban and Associate Jed Kurzban at
Kurzban Kurzban Weinger & Tetzeli in Miami.
Defense Attorneys:
Partner David Dittmar and Senior Associate Patricia Murray at
Dittmar & Hauser in Miami, representing Echenique;
Peter Restani, a Partner at Restani McAllister & Cassetty in Coral Gables, representing Miami Urological
In 2003, justice was finally served for 37-year-old Mr. Plasencia, the victim of severe medical malpractice. Suffering from end-stage kidney failure - unnoticed and untreated by three different physicians - Mr. Plasencia and his two minor children brought suit in 2000, recovered a verdict for a total of $5.75 million in damages from the jury.
In February of 1996 and in response to various complaints, Mr. Plasencia's general practitioner, Ms. Teresa Cardoso, performed a urinalysis and found clear warning signs of serious kidney disease. In spite of the presence of both blood and protein, Dr. Cardoso failed to recognize the presence and significance of the protein. Dr. Cardoso referred Mr. Plasencia to a urologist, Dr. Jorge Echenique, where two more urinalyses were conducted again showing the combined presence of blood and protein. Not unlike Dr. Cardoso, Dr. Echenique too failed to recognize the significance of the results and so did not order any follow-up tests.
After a year of continued suffering, Mr. Plasencia again visited Dr. Cardoso who referred him to a second urologist, Dr. Arthur Lim of Miami Urological and Surgical Consultants. Again, the urologist failed to interpret the available data or to gather new data in a useful manner and Mr. Plasencia was sent home. Untreated and still suffering, Mr. Plasencia checked himself in to a hospital where was diagnosed with end-stage kidney failure - the result of untreated inflammation of kidney tissue.
Defendants Echenique and Miami Urological Surgical Consultants argued that the type of kidney disease from which Plasencia was suffering was untreatable and early detection would not have substantially changed the need for a kidney transplant. Defense counsel David Dittmar argued that a directed verdict should have been entered for the defendants.
Prior to trial, physician Cardoso settled for an undisclosed amount. On May 9, following a 10-day trial and 5-hour jury deliberations, Mr. Plasencia was awarded $5.75 million in damages. The jury awarded $3 million in past pain and suffering; $1.5 million for future medical costs; $500,000 for Plasencia's two minor daughters' lost services and comfort and anxiety; $443,000 in future lost earnings capability; $228,000 in past medical costs; and $78,000 for past lost earnings. The jury also determined that while Mr. Plasencia was 1 percent at fault, Dr. Cardoso was 19 percent at fault, Dr. Echenique 53 percent at fault, and Dr. Lim and Miami Urological were 27 percent at fault. [or $1,552,500.00]

SEEMS TO BE A PATTERN HERE...SEND THE PATIENT HOME UNTREATED AND STILL SUFFERING!! BEEN THERE, DONE THAT!

ABOVE ARTICLE FROM THE WEBSITE OF KURZBAN, KURZBAN, WEINGER & TETZELI...